There’s a lovely moment in the film Moneyball, when Billy Beane (played by Brad Pitt) and his new nerdy assistant are in a meeting with the owner of the Oakland As. Data-cruncher Peter Brand (played by Jonah Hill) tries to point out that the run of poor results isn’t a “big enough sample to be significant” but is quietly shut down by Beane, as he doesn’t want stats talk in front of the owner.

But they were right. The question though, is always a good one. In fact, it’s the key one. Just as important as what data we are using is whether or not the sample is big enough.

In football, the key sample size is usually 38 – that’s a season of 20 teams playing home and away. It’s enough to determine the winner of the Premier League. What isn’t enough is five games.

Take a look at this graphic from the BBC. Ignore the fact that it’s in a column written by the normally insightful Robbie Savage – I’m sure he didn’t approve the graphic, let alone create it. He knows his stuff. His insight into the defence and selection policy of Van Gaal reads well. And Savage likes his stats, but he’s no statistician. This graphic, and the argument that after five games, Van Gaal has a poorer record than Moyes is pretty shabby. 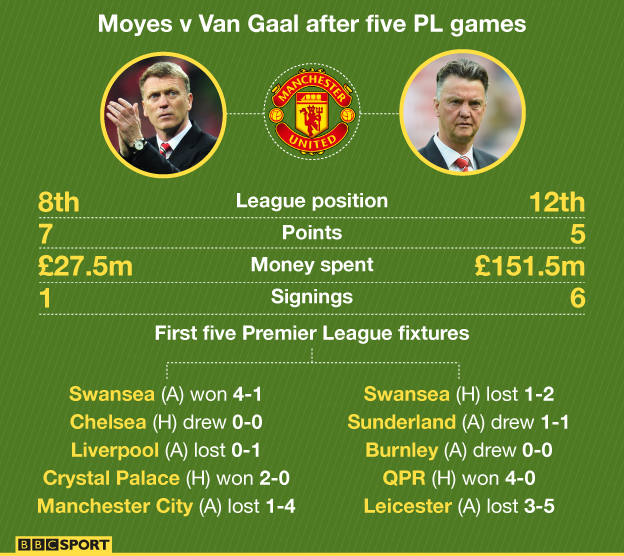 Clearly, the chart suggests that Louis van Gaal is an inferior manager to the dumped David Moyes. Look at all the money! Where are the results? Oh, where to begin?

Firstly, league position after five games is totally meaningless. Teams fly up and down the table with a few results at this stage of the season.

Next, money spent – how is that relevant? Man U have sold players too, but that hasn’t been put into this figure. Same goes for signings. In fact, you could argue that the higher signings should take longer to bed in.

But most importantly, five games is NOT A SIGNIFICANT SAMPLE. There happens to be a run of five games under Moyes where ManU got fewer points than this, at a very similar stage of the season. If you picked premiership games 2 to 6 under Moyes, you get this run of results:

That’s a run of five games with just four points! It just happens to be games 2-6 not 1-5.

In fact, there were two other five-game runs of two losses, two draws and a win – ie 5 points – under Moyes during last season.

What happens for the next 20 to 30 games will tell us about van Gaal’s signings and tactics. Five games tells you nothing about Man U, and everything about the journalism.